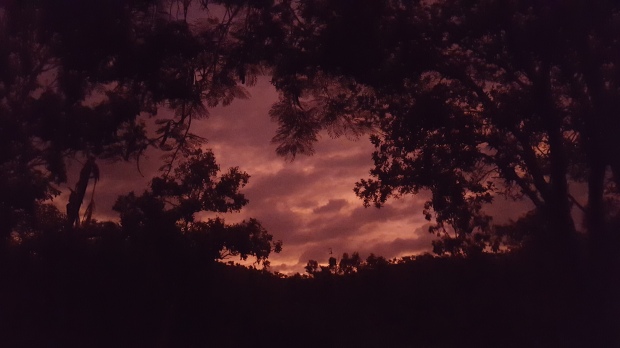 The sunsets leading up to the cyclone

Before coming to Queensland my home in Malaysia rarely got any natural disasters. We were in a region of the country that was sheltered from the brunt of the annual monsoon floods and very much out of the Ring of Fire. When I thought of cyclones, cows flying in the wind and tornadoes were my only impression. The general response I got from people (as with any case) was extremely divided and while there were people frantically stocking up on water, there were just as many people shrugging their shoulders and playing basketball whilst newscasters commented about the apathy of residents to evacuate low-lying areas. (Note: that last one happened on the live news in Townsville!)

1 week to impact: There was a murmur spreading about the cyclone and a few people started sharing updates from the Bureau of Meteorology regarding where and what time the cyclone would hit. At this point, it looked like Townsville would be dead smack in the eye of the storm! There were some jokes about having to buy water and food to last for a week but no one took anything seriously.

4 days to impact: Townsville was going to be hit with a Category 4 cyclone at this point and the devastating alias of our friend was called Debbie. Everyone was talking about preparation and how Cyclone Yasi in 2011 devastated homes and took down electricity, water, and phone lines for 4 to 5 days at a time. The realization of how reliant we were on these necessities was slightly disconcerting, and was reflected at how water, bread, torches, batteries, and canned food were the first to be taken off supermarket shelves. We were told there was a meeting between the seniors for the halls of residence to decide the sort of preparation we would have to take with the residents.

3 days to impact: So, things were getting serious, the cyclone hadn’t changed its course and it had its literal eye set on Townsville. Some of my friends on a field trip in the outback had to return home early and I heard Orpheus Island, the research station for JCU, had to be evacuated as well. Today was all about cyclone prep and I was getting slightly concerned with the BOM updates counting down our impact time, hence all the water jugs I filled up. As a Residential Assistant at one of the halls, we were briefed on what to do if the fire alarm went off during the cyclone and about resident safety. We rounded up all the residents to get a headcount of who would be here over the week and told everyone to store enough food and water, charge their phones and powerbanks, cook raw food in case the freezers went out, and where to park their cars. Towards the night there was a new update that the cyclone would be moving slightly further South than where Townsville was.

2 days to impact: It was a sunny, calm morning and I was doing a walkthrough of the entire college with the other RAs to put away loose items in the balcony and to answer any questions residents had about cyclone safety (somehow I became an expert myself after getting briefed 2 days ago). The grocery store on campus ran out of bottled water and there were more people buying flashlights than ever before. Aside from that, the idea of the power going out prompted a lot of my friends to buy Nerf guns to entertain themselves. I was excited to witness a cyclone- I was ready, my windows were taped up (yes, I taped them up), and everyone on my hall had enough food stocked up. With my growing anticipation Cyclone Debbie was moving further down South towards Ayr, about an hour from Townsville.

1 day to impact:  Cyclone Debbie was supposed to hit that night but its impact time was moved to the next day. The residents from Western Courts were evacuated and one of them who was friends with my floormate joined us in our cosy brick building. Although it was not particularly windy and the only ominous things were grey clouds, the campus was closed for the day. I had bought a new game and my friend was letting me use his PS4, so I wouldn’t say I spent half the day playing my new game, but apparently to everyone else that was the case. It felt like a regular day on college, there were people playing cards and having cyclone parties while we waited for some sort of major thing to happen.

Impact day: There was a lot of news on how the cyclone was tearing through Airlie Beach and delivering massive winds to MacKay but things were extremely calm in Townsville save for the odd gust of wind every now and then. The campus was still closed and all the colleges were on lockdown. Regardless, there were still people walking to different floors as usual but just not as many milling outside. There wasn’t much mood for any of us to study to so we made some pizzas, watched movies, and I may have spent a couple of hours on the PS4.

The last few days felt like 1 long sleepover because there were so many of us together for days on end, but everyone is carrying on with business as usual in Townsville. If you were hoping for there to be a sudden climax where the cyclone swung around North towards Townsville, I’m sorry to say nothing like that happened. A few people mentioned they were slightly disappointed, but I think nothing can feel more disappointed than the wasted tape I’ve used on the living room windows.

Note: I am in no way reducing the gravity of the situation that I know is being felt in the critical impact zones, this is merely an account of a student in Townsville.